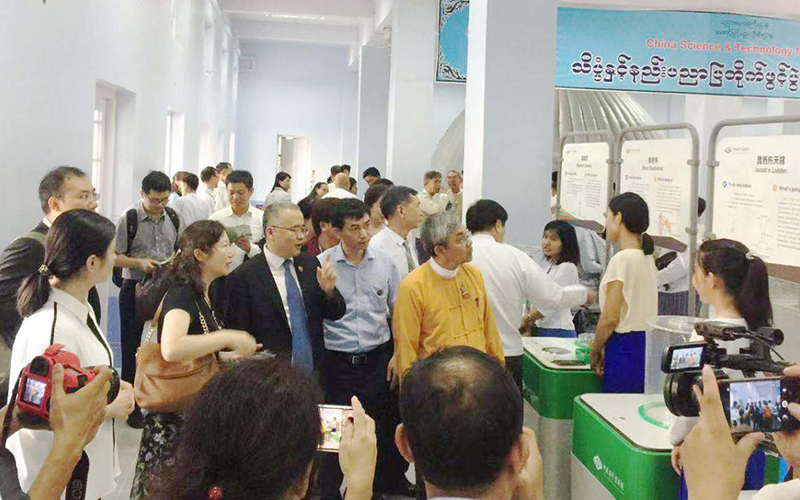 In order to celebrate the grand opening of the event, local students performed a unique Myanmar folk dance. The science and technology tutor from the China Science and Technology Museum performed the science experiment drama called "Crazy Circus". The science popularization knowledge and science experiment were integrated in the stage play, so that the Myanmar people could understand science, feel science as well as experiencing the most colorful scientific education activities with Chinese characteristics in a relaxing atmosphere.

After the finishing  opening ceremony, the guests, nearly 100 staffs from Mandalay government agencies and thousands of teachers and students from universities and middle schools visited the exhibition. All of them showed a strong interest in the exhibition content, saying that it was the first time that they had experienced so many new science and technology exhibition contents, which was fun and interesting, bringing science and technology closer to their life and making learning science easier.

Over 60 selected pieces of exhibits with good exhibition effect and strong interaction will be displayed in the Myanmar International Tour, which are the most popular among the Chinese public, covering several multidisciplinary fields such as basic science, life science, information technology, human health and various high-tech exhibitions like 3D Printing, Smart Robot, 3D TV for Naked Eye. Meanwhile, the mobile dome cinema will show science and technology-themed films for the Myanmar people concerning popular themes like aerospace, dinosaurs, etc. The exhibition, which  covering an area of 800 ㎡, is expected to tour Myanmar for 3 years. The exhibition has been exhibited in Naypyidaw, which is  the capital of Myanmar in June 2018, which has achieved fruitful results. In order to serve more Myanmar people, the second journey was opened in Mandalay, the second largest city in Myanmar. The Myanmar International Tour Project of China Mobile Science and Technology Museum will certainly promote the in-depth development of science, technology and culture exchanges between China and Myanmar, support the win-win cooperation of science communication and science education between the two countries, and advance the bilateral exchanges and prosperity of science and culture.